The remainder of this page explains how to set up a host-board pair. We will use the terminology introduced in the Overview (board, host, superhost).

The Wolf Mountain board comes pre-connected to its host SoC. They are both contained within a single plastic box. The images below show the enclosure as well as where ports can be found.

To set up the Wolf Mountain / Meridian Hill system:

The user guide is especially useful for reading status LEDs on the host (see section 5-3). The image below shows the location of components important to the Nahuku / GHRD Loihi system. 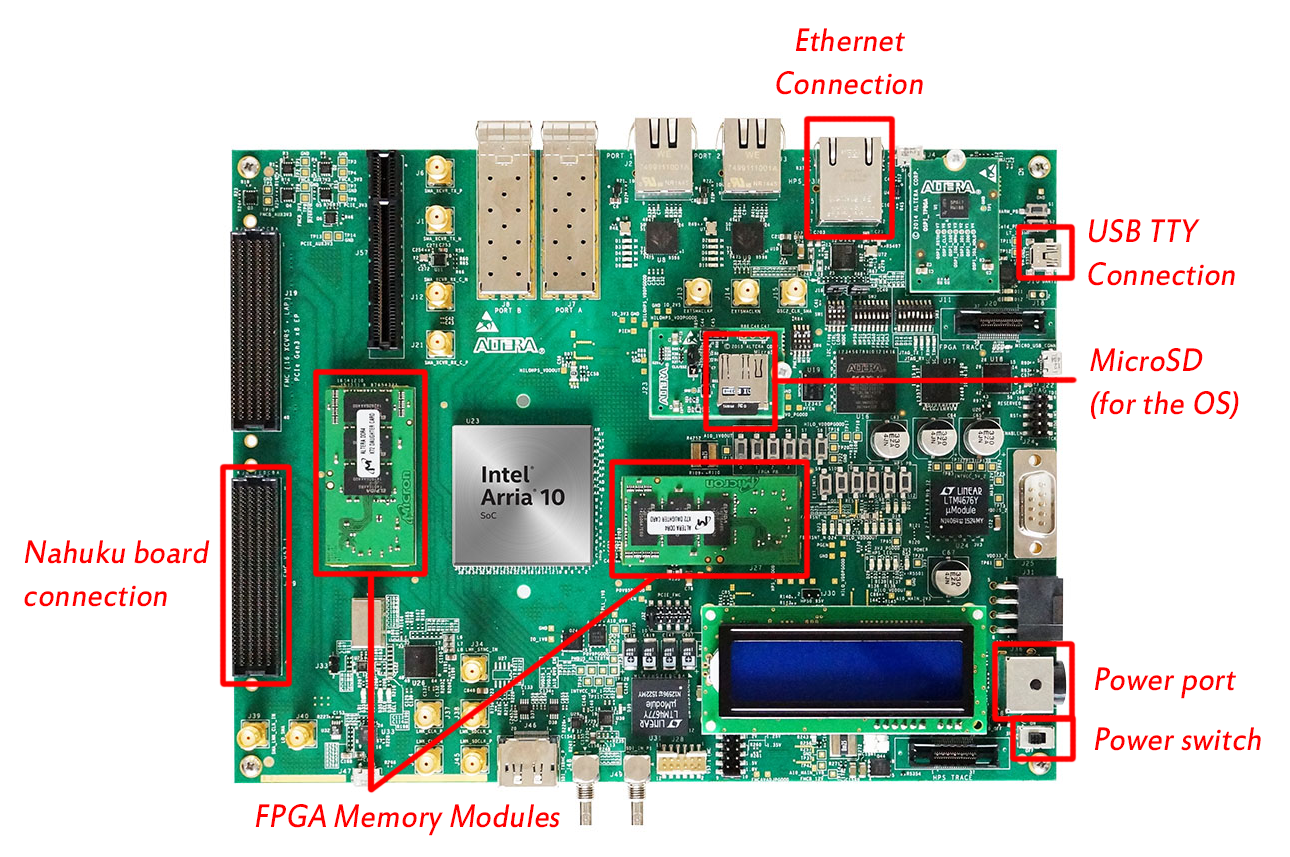 To set up the Nahuku / GHRD system:

The microSD card on the host contains its operating system. Creating an SD card image requires you to:

These steps are based on this guide. These steps should be performed on the superhost. You will need root access.

For simplicity, begin these steps in a new empty directory on a partition with several GB of free space.

Begin by switching to the root user.

The ubuntu-rootfs directory you set up contains operating system files. We will now use chroot to act as though we are using those files rather than the actual superhost OS. Note that we are still running as the root user.

Then, within the chroot environment:

We can now exit the chroot environment

And unmount the environment files

But stay as the root user for the remaining steps.

The Loihi specific configuration files can be obtained from Intel’s cloud server. Download all of the files below to the directory that contains the ubuntu-rootfs directory.

As of August 2018, the latest files for the two Loihi boards are located in:

and one of the following FPGA device tree blob files, depending on the system:

Additionally, you need the u-boot preloader image, uboot_w_dtb-mkpimage.bin. The location of this file is also system dependent.

Your folder should now contain the following files if you are setting up a Wolf Mountain system:

And the following files if you are setting up a Nahuku system.

The easiest way to make the SD card image is to use a Python script provided by RocketBoards.org.

We assume in the following steps that you are in the directory containing ubuntu-rootfs and the Loihi FPGA files, and that you are still acting as the root user (if not, do sudo -s).